Electromagnetic compatibility tests are necessary to legally mark a product with the CE mark and sell electronic and electrical devices in Poland or other European Union countries.

The Zamel laboratory offers equipment testing for compliance withEN / IEC 61000 standard at the construction level in the scope of:

We have an ultra-compact UCS 500 simulator at the measuring stationwith N5 module, DITO electrostatic discharge simulator and capacitivea coupling clamp as well as accessories for studying RF-induced disorders.The manufacturer of these devices is a leader in the field of specialized equipmentmeasuring company EMTEST. Test devices have very good propertiesutility, convenient connection of measuring apparatus, clear menu structure. They ownthey have built-in standardized test kits so that measurements are easy,reliable and secure.

In our laboratory, in addition to standardized tests, it is possible to carry out"user" tests. During their implementation we have the ability to change parameterstest freely in order to more accurately verify the operation of the devices tested and to detect any errors at the device design level.Test devices are calibrated in the company's accredited testing laboratoryEMTEST and guarantee full compliance with standards.
The tests are carried out under the supervision of qualified engineering staffstandardized test stand.
During the tests it is possible to register its course (recording via a camera to a computer hard drive).Research carried out in our laboratory is a solid basis for final testingcarried out in an accredited laboratory.
In addition to high-class measuring equipment, our laboratory also has facilitiesenabling rapid modification of the structure during testing - positionsoldering, parts magazine (capacitors, coils, chokes, resistors) and wiring.We also have basic measuring equipment in the form of multimeters.As part of the service, we provide measuring equipment to the interested company / personhigh class. We provide assistance in its use (especially for user tests)and test configuration. However, the person joining the study should do so on their ownprepare their program and define according to what standards and at what levels they should betests performed.

The scope of tests at the test stand

At the test stand with the UCS 500N5 simulator, we offer design tests inrange: Holiday A) - Test of resistance to a series of pulses of fast-changing transient disturbances(BURST) in accordance with EN / IEC 61000-4-4

B) - High energy shock test (SURGE) in accordance with IEC 61000-4-5
Standard tests:In the scope of standardized tests, the repetition rate and the number of pulses can be changedper test level. The user can choose the maximum allowableSURGE surge current for the tested device.

C) - Surge immunity test in accordance with IEC 61000-4-11 in the rangedips, short interruptions, voltage fluctuations
Tests can only be carried out in manual mode, in which we have the optionchoosing one of five dip levels, determining the duration of the dip and determiningangle (0, 180, asynchronous).

D) - other measuring possibilities
In addition, we have a capacitive coupling clamp (CCC) connected toUCS500N5 to test interface resistance of tested devices (tracksmeasuring devices, triggering systems) for BURST fast changing pulses.We also have equipment that allows you to study the impact of the electromagnetic field at very muchwide frequency spectrum on the device tested.The scope and program of these tests are set individually with the Principal.

The DITO testing device is lightweight, handy and makes testing easierintuitive menu and ergonomic design of the device.At the test stand with the DITO electrostatic discharge simulator we offerdesign tests in the scope of EN / IEC 61000-4-2 related to resistanceESD discharge devices. 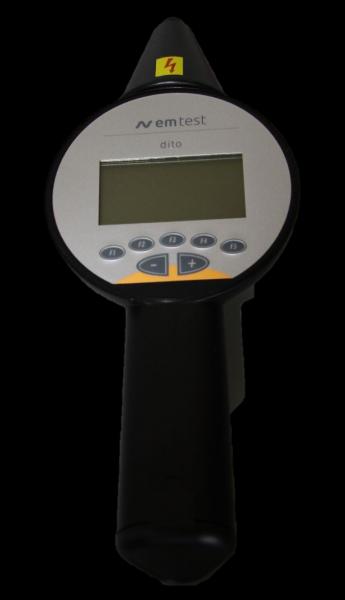 Tests can be run in the mode:

In our laboratory we do not have measuring equipment that allows us to conduct a complete set of tests in the field of electromagnetic compatibility (EMC) of devices and systems. Among other things, we are not able to measure the emission of conducted and emitted electromagnetic disturbances. However, we have very good contacts and cooperate with accredited research laboratories. Based on these research centers, we can implement an additional scope of tests: Emission compliance with EN61000-6: 32007 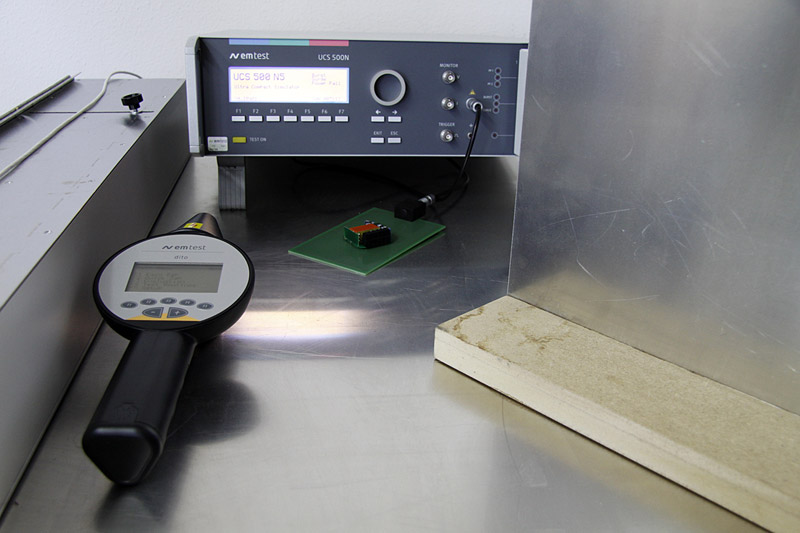 The laboratory offers assistance in the preparation of technical and construction documentation (TCF) and improvement of devices in order to achieve the state of electromagnetic compatibility, as well as offers consultation and individual training.